Our collection of animals has expanded, albeit temporarily. First up is Spot the dog who is staying for a few weeks while his real family are swanning around the Isle of Man:

Observant readers will notice that Richard is enjoying two hobbies at one time ie reading about brewing beer and drinking his own at the same time. There is also a tub of something bubbling in the man cave (‘Don’t touch!’) which he fusses over while licking his lips.

Next up is the little chick. When we got back from Sintra our grey hen Hattie became broody. After a few weeks of not being able to shake her out of it we decided to take advantage instead and, thanks to people we know who have hens and a cockerel, slipped some eggs under her without knowing if these were fertilized or not. Her patience was rewarded with a little chick (actually 2 of the eggs hatched but alas one was squashed) who, now almost 3 weeks old, is the cutest thing on two spindly, and slightly feathery, legs.

Jussi meanwhile is now the eldest in the household having celebrated her 10th birthday (making her 70):

Richard has been badgering me to update the blog about the veg patch which I must admit I have been putting off.  I’m afraid there is a feeling of despondency as I wander round the beds. The wet spring and crappy July weather (I have failed to understand how the whole world seems to be having a heatwave and yet here in Portugal we’ve had grey, cold, misty days with never a forecast reaching 30 let alone the temperatures of over 40 last year – which I am 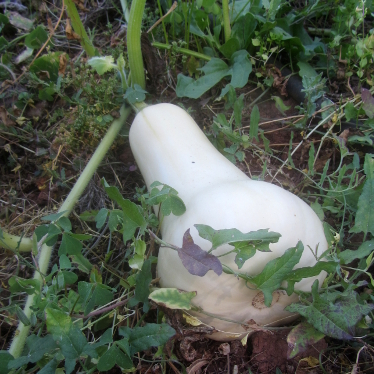 not missing I hasten to add) hasn’t helped but I’m not blaming the weather. The problem is a growing one that has got worse and worse, creeping through the plants, climbing and devouring all in it’s way: yep, the veg patch is riddled with bindweed.  It was quite bad last year but now there is an invasion. I try to use the ‘no-dig method’: firstly come the winter the beds are covered in a thick mulch of compost and leaves, usually over a layer of cardboard or newspapers, which is slowly broken down by the worms (and therefore doesn’t need ‘digging over’). Then this is repeated once the new seedlings go in to keep the soil moist and prevent the weeds coming through. But nothing stops the bindweed. Whilst weeding the spring beds before applying the new mulch I can hear their roots being torn. One small section takes simply ages to clear and as these roots go down at least 3m it’s actually impossible to get rid of. Any broken roots multiply into new plants; so hence the sense of despair. 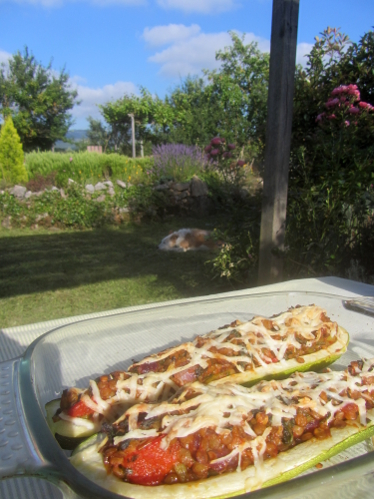 Despite this there is still stuff growing that has combatted the cold and battled the bindweed. The kitchen is full of bowls of tomatoes, some to be roasted, some to be made into passata, some to have in salads and some to be dried.  We have had the first aubergine, all of the sweetcorn and many runner beans. And a feast of courgettes: in cake, stuffed, in ratatouille, in salads, barbecued… in fact I don’t think a day passes without some courgette being eaten in some guise or another. The strawberries are great and we try to get the raspberries before the birds.

So the last day of July, and the last day of the cooler weather.  Temperatures are set to rocket from tomorrow so time to enjoy the pleasant evening sunshine and join Richard with one of his homemade tipples.