The birds 1 First up the chooks. Well, we are really pleased that at least one of the new hens we bought back in September is now laying. Not the biggest of eggs but small and perfectly formed. The remaining hens (now called the old hens) are trying to make amends for their past poor performance and recently we’ve had 3 eggs a day from them.

They’re a little miffed at the mo. The new hens have been taken from their original patch and put in a new one, full of luscious green grass. The old ones are left to dig around in the dirt having eaten every blade and scratched up every root.

The birds 2 January is always a good month for bird watching from our living room windows. It’s not uncommon to see 15 different kinds of birds at one time, mostly the various finches on and under the feeder, but also warblers, pipits and wrens. For some reason the tits have turned their beaks up at the fat balls we put out but the great tits are happy with the seed.

A first for us here at Casa Azul was a short-toed tree creeper doing it’s thing around the olive trunks. And we were really surprised to see a hoopoe preening itself in the plum trees, they’re summer visitors and shouldn’t be here until April. 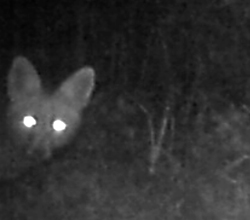 Foxy We treated ourselves recently to a wildlife camera, one of those that takes photos and videos when something walks past. I’d chosen what I thought was a good spot, opposite some kind of underground nest, but nothing. So after a few weeks chose a different spot where it looked like animals had passed. Success! One night the shot of a passing tail and then a short film of a curious fox. Just keep away from the chooks, foxy!

I think we were softened up by the winter of 2011/2012 which was a series of warm sunny days followed by clear frosty nights. Last year was rain, rain, rain and this winter has been more of the same. However, I can’t complain too much because this is the opening paragraph from last year’s blog: “I know January is only two thirds over but we’ve had enough already! Although not as bad as the UK, we’ve had rain, rain, rain, culminating in storms this weekend which knocked the power and water out for three days. And there are more thunderstorms to come.” So not quite so bad this year – up till now! However there are plenty more similarities between this year and last:

For instance enjoying a day at the beach under a glorious blue sky.

However, this year Jussi is wearing the big plastic collar – her ears are playing up and she has managed to cut the outside of one by scratching it. Remember this time last year Betty had the big collar to stop her licking a huge wound caused by a wild boar trap! This year she’s decided to take it easy:

However she does enjoy “playing” with the local cats.

And the daffs are coming out again, as they did last January. There is no mention of oranges last year, but I’m sure we had plenty. This year there don’t seem to be as many but they are whoppers! Grapefruit size and delicious. One new thing, and something I’ve wanted to do for ages is to get rid of the ivy around a walnut tree. When we arrived (4½ years ago!) I managed to get the ivy off most of the olive trees and what a job that was. Many of the ivy stems were thicker than my leg and tightly wrapped round the trunks. Anyway, this year I finally got round to this walnut. Here it is in all its glorious nakedness.

In one of the last posts of 2013, I mentioned that we had started work on the rockery. Well, it’s pretty much done. Not so much of a rockery now, more a bed, but we will be planting some flowers and a few more herbaceous perennials when the last of the frosts has gone.

Lets hope the similarities continue as we had a great 2013 and here’s to an early spring!

Why the question mark? Well it definitely is winter, with our first frosts and temps going well below freezing. But as you can see from the thermometer in the polytunnel, crazily it has still got into the 30s during the day and we’ve had some cracking sunny days: Lunches al fresco and runarounds on the beach.

First thing in the morning, it’s a Christmas scene.

But we still have quite a few flowers. Above are chrysanthemums and below, one of many roses.

The sudden sharp frost that we had yesterday meant that finally the Plane tree in the courtyard has started to lose its leaves.

But the days are still sunny and warm and perfect for a runaround on the beach followed by lunch at one of our favourite beach side restaurants.

Meanwhile, back at the house a project which I have wanted to get going for ages has lurched into action. By the threshing square is a pile of rubble, rather grandly termed ‘the rockery’ although all that grows there are a few hardy weeds. Well this winter I intend to get it sorted. At least I’ve made a start…

Betty is supervising. In her own way.

As we know this is when she is at her sweetest – when she’s asleep. When she’s awake she gets up to all sorts. One day last week during a walk, she managed to grab a wild bird. It was something like a grouse but as she refused to come anywhere near with it (hence the blurry photo taken from distance), we can only speculate. It is now buried somewhere for future retrieval no doubt!