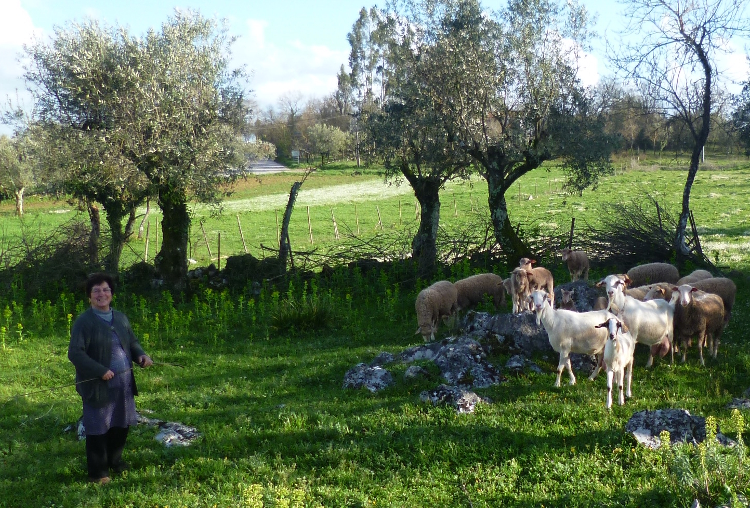 There is a lot going on at Casa Azul but I mustn’t let another month go by without saying a fond farewell to my dear friend and neighbour, Dona Helena (affectionately known as the goat lady before we knew her real name).  She used to bring her goats and sheep to the fields near our house and one of the first winters here I went out and gave her some mince pies. We became friends after that, swapping food, recipes, plants and cuttings; she was full of information about the local plants and loved talking about the history of the village. Because of her I know the state of the roads (not tarmacked of course) were during the rainy season, many of the residents kept oxen and donkeys which made it impossible to pass sometimes.  She showed me the house in the village (long empty) where she had classes, the teacher came by bicycle but not when it was too muddy. She hated the fact that, unlike the boys, she couldn’t then go to proper school as it was considered inappropriate for her to travel too far away. She talked about how hard it was living there without water and electricity. There are some large flat stones in the pond on the hill on our dog walk, those she said, were what they had used to wash the clothes.

One day she, her daughter-in-law and I walked up to Ateanha, a village on the hill above ours. Her mother came from there. We walked around meeting and greeting friends and relatives of hers. And then she took us up to the highest point in a clearing in the woods and produced a simple picnic for us to share. She didn’t speak a word of English and it really was thanks to her that I made any progress at all in Portuguese and passed the language test to become a Portuguese citizen.

One day I got up extra early and helped her milk the sheep  for her cheese. She made batches of the stuff which she sold to those who knew. She used a simple, traditional recipe and the cheese dried on a plank under the eaves. The video is one from our website again and I’m really pleased we have that as a fond memory of her. She gave up the sheep and goats a few years back, it just became too much for her.

Now she has gone her house is shuttered up, just like the house of Luis and Laurinda opposite. They were my main friends in the village and it is so very sad that none of them are here any more but we are both so happy to have met them, been invited to their homes, and shared the easy companionship of the Portuguese.

Oh and if there is an old man or woman who lives alone where you live, someone you are on nodding terms with only, go and visit them. Take a cake. Share it with a cup of tea or coffee. Learn about life before the Internet. “The past is a foreign country; they do things differently there.” Find out what that was and make a new friend.

12 thoughts on “The goat lady”