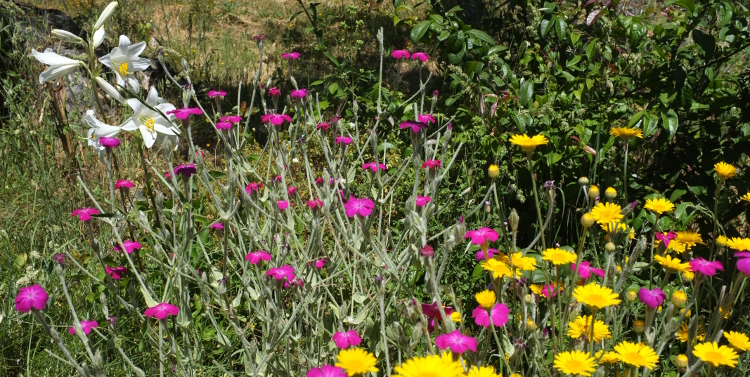 Bracing Just as we thought summer had kicked in the clouds came over, the wind picked up and temperatures fell.  It’s a max of 18 today and it’s barely gone much over 20 since the start of the month.  So what are the other B words (and no, not that one)?

Birds Since the first week of April we have been welcomed every morning by the nightingales. There is always one singing in the olive trees at the end of the garden, we never get to see it until it dives for cover when we get too close.  The number of nightingales in the UK has fallen dramatically, and a lot of research has been done to find out why. Loss of habitat seems to be a major culprit. The British Trust for Ornithology states: “…the ideal habitat is probably a dome of increasing vegetation heights, with a crown of vegetation dense enough at the centre to create bare ground underneath, and a gradient of ground-cover towards the edges where the species can nest…” and that is exactly what we have here. Many of the fig trees have grown very tall and are surrounded by smaller bushes including blackthorn and hawthorn, all favoured by the nightingale. This group is in the neighbouring meadow, you can’t see the thick ring of brambles around the base, it’s impossible to enter: 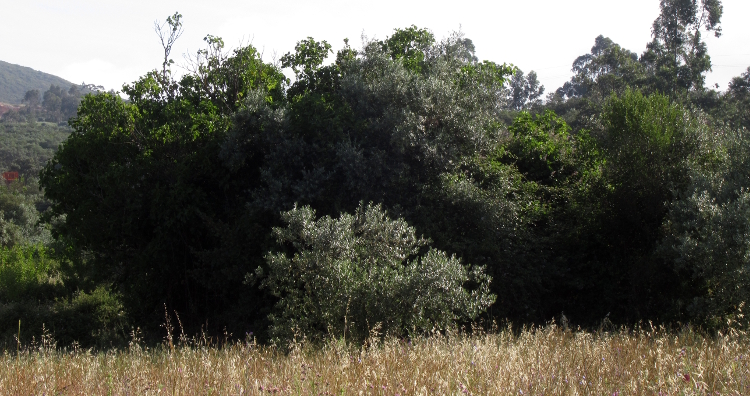 Interestingly, it’s the increasing deer population in the UK which takes some blame, they are simply browsing on the shrubs and bushes where the birds want to nest.

In the courtyard we have had three sets of birds nesting this season (not counting the wrens which made a nest in February but didn’t use it). Firstly, serins built a nest in the rose bush above the door in exactly the same spot as one last year. We would love to know if it was the same pair, or perhaps their offspring. Secondly, goldfinches built a nest in the top of one of the orange trees and lastly, in our plane tree, there are blackbirds. We are surrounded by countryside, there are bushes and trees galore everywhere and yet again our courtyard is chosen. (I think this now makes 6 or 7 different kinds of birds.)

Bugs It would be nice to say that we also have lots of insects but, like the UK, these are definitely on the decrease. We have two buddleias in bloom, their scent is heavenly, but very few butterflies are seen. The lavender has been a magnet for bumblebees in the past but again there are far fewer this year. We really hope the cooler weather has been the main cause and that once the temperatures rise they’ll come out to play.

Broccoli I planted 12 broccoli plants in one of the new raised beds and they grew amazingly well. So much so that most of them had to be frozen, even half was too much for us for one meal. I did find a great pasta dish (I remembered Inspector Montalbano loved pasta and broccoli) and we had that a few times. So for a first crop with the new system that is a happy success.

Baking The first of the fruits are coming now. The cherry season sees me making one of my favourite desserts: clafoutis. The cherry version I do as the French and leave the pips in, and then, as we have had an abundance of gooseberries, I made it with those and that worked really well too. Fingers crossed for a good raspberry crop because those make the best clafoutis of all.

Branca We tried to introduce Rocky back into the flock but the attentions of Skittle were too much for her. Not only did he make her neck a little red she cowered for the rest of the day under the bramble bushes. So we decided that she really did need more time for the feathers to grow back and she also needed company. Welcome, Branca. From day one they have become the best of friends. The plan is that once Rocky is completely ready, Branca will be old enough to meet Skittle too. And with two new hens he’ll, with luck, be less obsessed with Rocky. We’ll see! On the left Branca and Rocky sharing some quinces, and little Hazlenut:

Lacey with Mo and Preta, and the ruler of the roost, Skittle:

Just bossy boots Hattie not shown here. So one cockerel and seven hens – what on earth are we going to do with all those eggs?!